skip to main | skip to sidebar

The tradition continued in 2012 where I read a whopping 144 books! Here is my list from that year.

In 2018, I read only 54 books. I spent most of my year driving the kids around, haha! Here is my list from that year.

In 2021, I joined a Facebook community called "Read What You Own Challenge". I challenged myself to read more books I owned and get rid of as many as possible! I also started counting audiobooks and juvenile fiction, which I had not counted in previous years, until last year. Having that group really added accountability. I am so happy to say I read 203 books in 2021 and bought only FIVE for the entire year! I also donated way more than I kept. I made pie charts because I'm just a huge dork like that and they make me happy. 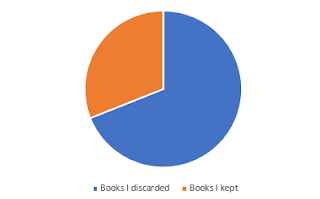 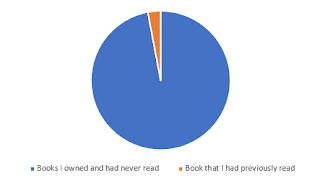 Here's my 2021 list:
Books I read with the kids:
Most eye-opening book: I Am Malala
Favorite JF books: Number the Stars, A Little Princess, anything by Richard Peck, Roll of Thunder Hear My Cry, any Paddington books, Rabbit Hill
Favorite adult authors: Stuart Woods, L.M. Montgomery, James Herriot, Liane Moriarty
Best autobiography: Becoming by Michelle Obama
Favorite self-growth books: The Happiness Advantage, Atomic Habits, Essentialism
Favorite theology books: Brothers, We Are Not Professionals by John Piper and More Than a Carpenter by Josh McDowell
How did you do this year? What were some of your favorite books and authors??
Posted by Amanda at 8:09 PM No comments:

In 2020, I read 152 books. My goal was to try to move books out of the house that I'd never read. I read a lot of juvenile fiction to see if they were worth keeping. I kept 76 of the books I read, so I think I did pretty good about moving some out of the house!

Favorite theology reads: "Name Above All Names" by Alistair Begg & Sinclair B. Ferguson, "Trusting God" by Jerry Bridges, "The Difficult Doctrine of the Love of God" by D.A. Carson, "The Post Quarantine Church" by Thom S. Rainer, "The Attributes of God" by A.W. Tozer (148)
Classics I finally read and LOVED: "The Wonderful Wizard of Oz" by L. Frank Baum, "The Marvelous Land of Oz" by L. Frank Baum, "Little Women" by Louisa May Alcott, "Little Men" by Louisa May Alcott, "Alice's Adventures in Wonderland" and "Through the Looking Glass" by Lewis Carroll, "Anne of Green Gables" by Lucy Maud Montgomery (and all the rest in the series that I've read), "The Adventures of Tom Sawyer" by Mark Twain, "Bed Knob and Broomstick" by Mary Norton, "Black Beauty" by Anna Sewell
Favorite kids books: "Ben and Me" by Robert Lawson, "The Cabin Faced West" by Jean Fritz, any Paddington books by Michael Bond, "Lily's Crossing" by Patricia Reilly Giff, "Bully for You, Teddy Roosevelt!" by Jean Fritz, "Stone Fox" by John Reynolds Gardiner, "The Night Crossing" by Karen Ackerman, "The Big Wave" by Pearl S. Buck , "A Blizzard Year" by Gretel Ehrlich, "Babe: The Gallant Pig" by Dick King-Smith, "We Were There at the Boston Tea Party" by Robert N. Webb, "All Alone" by Claire Huchet Bishop, "Al Capone Shines My Shoes" by Gennifer Choldenko

Favorite adult authors: James Patterson, Stuart Woods, Mark Batterson, D.A. Carson, Lucy Maud Montgomery, Max Lucado, Jodi Picoult, John MacArthur, A.W. Tozer
Chapter books read out loud with the kids: "The Two Princesses of Bamarre" by Gail Carson Levine, "Mr. Cooper is Super" by Dan Gutman, "Tuck Everlasting" by Natalie Babbitt, and "Because of Winn-Dixie" by Kate DiCamillo
How did you do this year? What were some of your favorite books and authors??
Posted by Amanda at 4:29 PM 1 comment:

2. Use my bread machine at least 3 times

3. Try 5 local restaurants that are new to us - Khan Mongolian Grill

12. Go to one Macon Bacon game

13. Go to one Macon Mayhem game

19. Take the kids to the Hogg Mine

22. Go to a monster truck rally

25. Go with the family to the Biltmore House

26. Take the kids on the SouthStar Trolley in Augusta

32. Do the CFA tour in Atlanta (whole family)

36. See one show at the Center of Puppetry Arts

43. Go tubing with the kids

48. Go to the Habitat for Humanity Global Village & Discovery Center

50. Go out of state for our girls trip

53. Get my hearing checked

58. Pay for the person behind me in a drive thru

61. Help with Party with a Purpose at least two times

62. Volunteer with Meals on Wheels at least 3 times

63. Work at a food bank at least once

65. Do 20 acts of random kindness with the kids

69. Pay off the Discover card.

72. Have 5 months minimum with no eating out

77. Catalog every book in the house

78. Finish all the pork in our freezer

84. Get recertified for CPR

90. Find an escape room that Bri can do

93. Clean the photos off my phone

98. Go to convention at least once 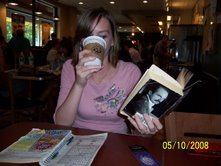 Either an up-to-date or out-of-date report on the lives of the Talberts.